Our driver will meet you just outside the cruise termnal in Chios Port and after 30min. drive through the monastery of Nea-Moni Anavatos

From the port of Chios and the west of the city the road is continuous uphill, first thing you encounter on way to the top is the recent monastery of Voithia, dated from 1925. This is one of the monasteries that it is still inhabited, and its nuns make wonderful craftwork and embroidered pieces. Six kilometers away from Hora(Chios Town), a little further up on the way, the road crosses the small village of Karyes, famous for its springs of fresh water and for its amazing and unique panoramic view of Chios and the shores of Asia Minor. 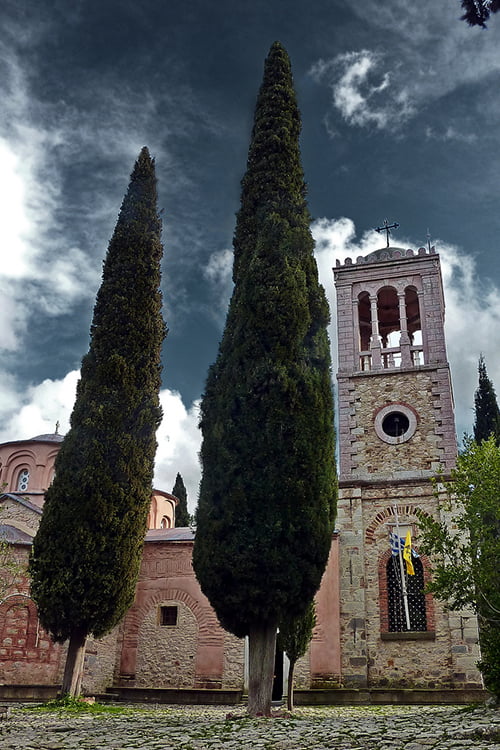 The 11th century Nea Moni (New Monastery) on the eastern Aegean island of Chios represents a characteristic example of the Middle Byzantine architecture and aesthetics, a period known as the golden age of Byzantine art or the Rennaisance of the Macedonian dynasty reign. 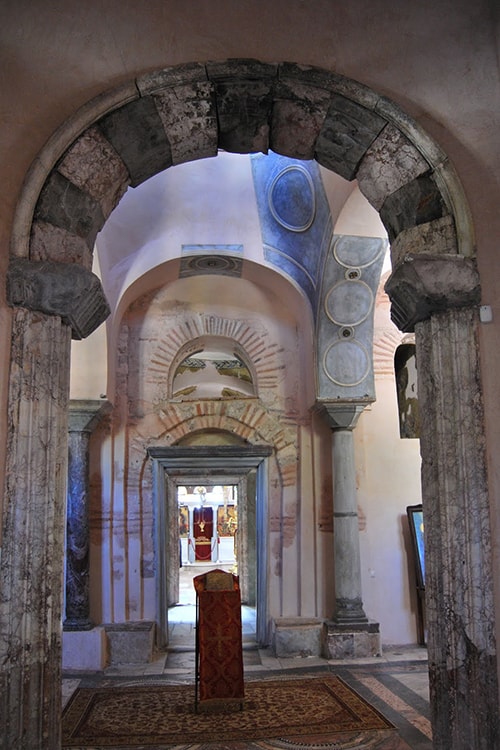 The main church of the complex, the katholikon is built on a cross-in-square plan with a large dome supported by squinches defining an octagonal space. The dome, approximately 7 m in diameter, has no lateral bays but is placed between a triconch sanctuary and a narthex preceded by an exonarthex with lateral absides. The construction of Nea Moni illustrates the so-called insular architectural type, found in Chios and Cyprus. The interior is decorated with superb mosaics on a gold background, among the finest examples of the Byzantine era, a folk transcription of the great models of Constantinople. 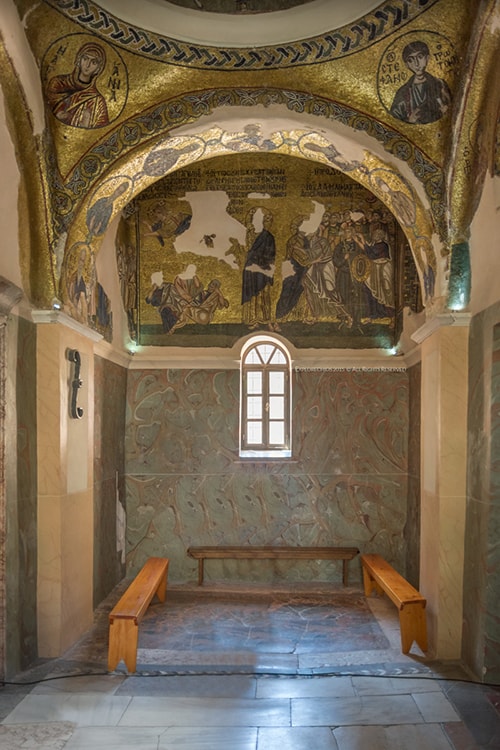 The construction of the monastery is fully documented as it was linked to a major event in Byzantine history. Constantine the Gladiator, a nobleman living in exile, was told by two monks of Chios, Nicetas and John, that he would become Emperor. When Constantine Monomachos married the twice-widowed 64-year-old Empress Zoe in 1042, thus becoming Basileus, he remembered the prediction. In 1045 he founded the monastery, choosing as its site a valley on Chios on the slopes of Mount Aetos and bestowing it with possessions and privileges.
Still further up, after the Kourna monastery on the left hand side of the road, a thick forest of pine trees dresses the Provation mount. Again on the left, the place where Agios Markos lived as a hermit is located further on the way. Today it is a small monastery whose view is almost comparable to that from Karyes. Continuing to the west, 15 kilometers away from Hora and more or less in the middle of the island, stands Nea Moni. This impressive worldwide known Byzantine church is the most important monument of the island, as well as one of the most important Byzantine monuments in Greece and a monument of international significance. The architecture of the main temple is the well-known "island" octagonal type, whose only examples existing today are in Chios and Cyprus. It was built in the 11th century (between 1042 and 1056) honoring the Assumption of the Virgin Mary. 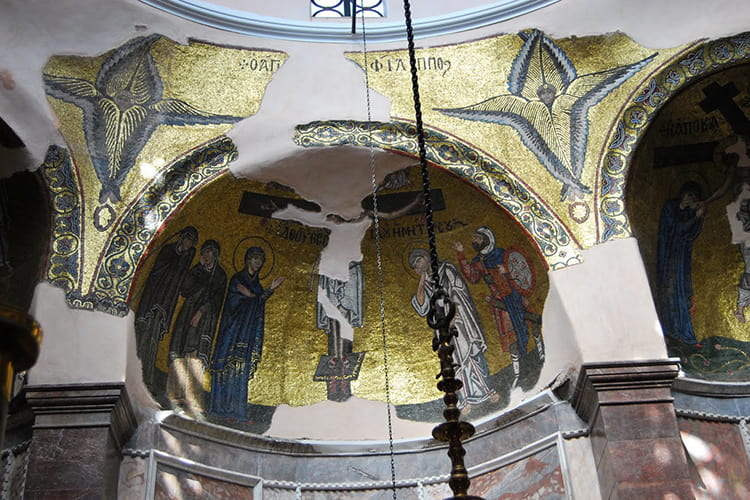 The deserted tower-village of Anavatos

Three kilometer after Nea Moni you will see another road on the right that takes to Avgonyma through the biggest forest on the island. Avgonyma is located on a 450 meter high hill, the village was built in the Middle Ages and is one of the best preserved villages of Chios, characteristic is that the houses are built together. Most homes are now suitable for habitation. Narrow streets bring visitors to the main square, where the find the church of the village and some in traditional architecture builded tavernas. The beautiful view and great food make Avgonyma a unique destination for every traveler. Four kilometers after Avgonima, after turning north, you will find Anavatos, the Mystras of the Aegean. Due to its location on a large granite rock at the end of a cliff, the ancient city towers majestically above the surrounding area. Although it is a deserted village, it has still preserved its history, which is often sensed by the visitor when wandering through its stone-paved streets. The village is built on a rocky elevation with steep sides and sheer cliffs on the South and West, so that it can only be approached from the North. This natural defenses make it probable that the village was originally founded in this site for security reasons to control the west cast during the period of piracy. Nowadays the settlement is almost completely deserted. A medieval castle stands on top of the village, which developed with time passing by into the shape of an amphitheater with the acropolis at the edge of the ravine. Quite a lot of the settlement’s narrow fronted homes are preserved to give a unique picture of a ghost town in a wild evocative environment.

Anavatos is a byzantine tower-village in the center of Chios. Due to its location on a large granite rock at the end of a cliff, the ancient city towers majestically above the surrounding area. 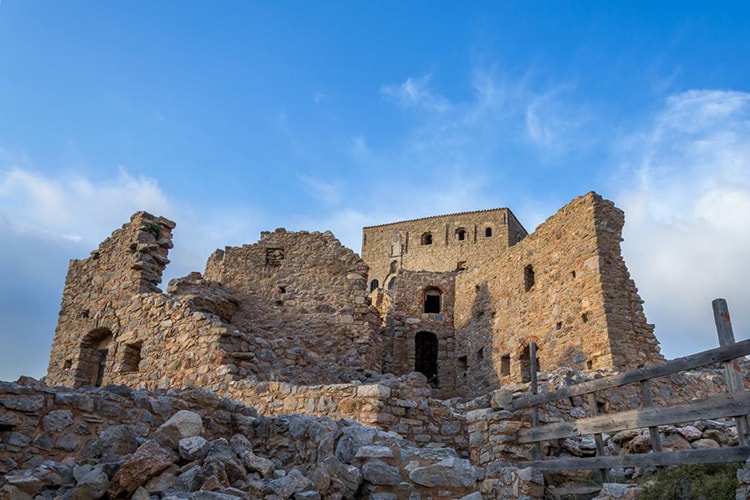 Anavatos, the village monument with its tower-like houses, arches and steep cobbled roads, constitutes a beautiful and awe inspiring place, and the remaining homes today reveal the flavor of this lost village. 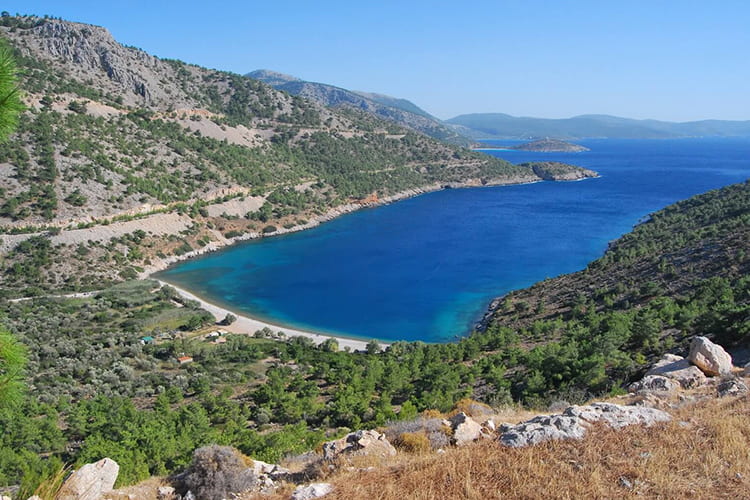 Reaching the coast west of Anavatos, Elinda, a beatiful cove with a preserved, desert beach is located, where nature is still ruling, and visitors can enjoy the natural beauty of the island of Chios.
Next on the west side, little beaches away from the road dominate the coast. Most of them can only be reached after a few hundred meters walk down a steep hill, so the trip is usually rewarded with a small picturesque beach for your exclusive use and enjoyment. The beach of Elinda is the most popular on this area and it has a road connection. Finally the village of Lithi reaches four kilometers away from Elinda, the village is famous for its excellent fish taverns, will provide the visitors with delicious red mullets, huge blackfish, bass fish and lobsters alongside the Aegean Sea. 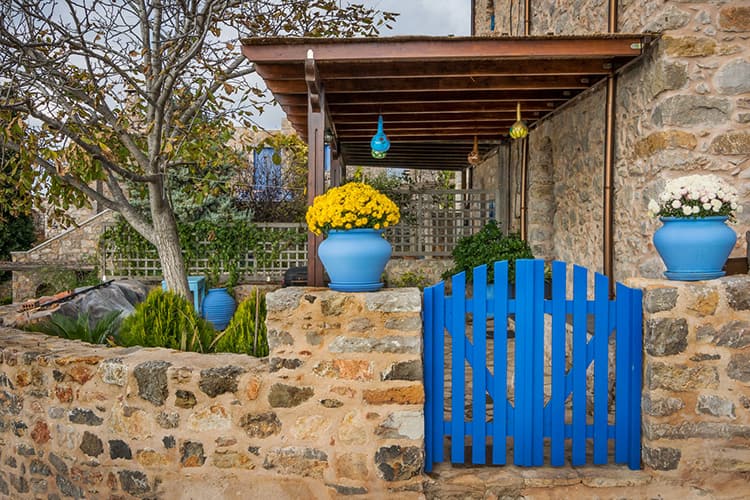 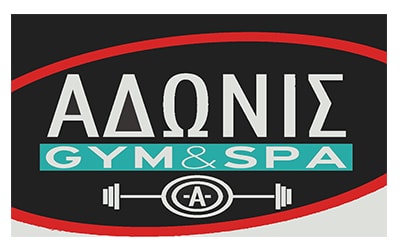 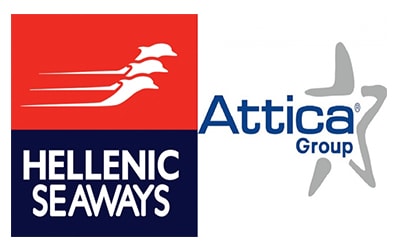 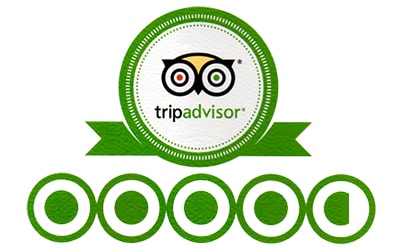 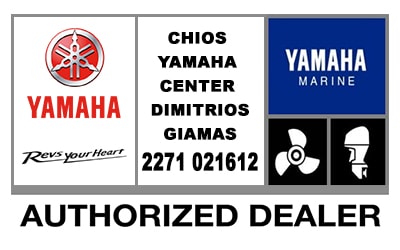 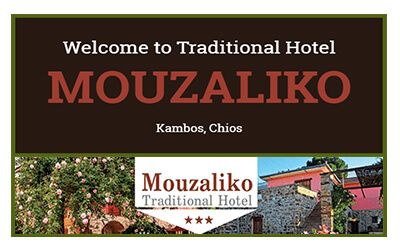